The sea – an eternal inspiration for artists, poets, musicians and people of art. Many poems have been written for sea and many artists have been drawing it’s magic. The sea has always been a harbor for many artists – interesting and challenging, magical and vast….

But how is the sea presented in Nadya Peovska paintings?

Having stand most of her life, Nadya has a strong connection with it. Spring and summer are her favorite seasons, because then new new life is arising and the air is filling with different fragrances, then we open our senses. “I like to feel burning sand on my feet, the wind touching my skin and noise of  waves. And when I look at the endless blue sea, I can stand for hours and glazing in this deep blue. I also love the nostalgia of passing summer. I love September, I love figs, I love all those days where everything has its vibration…. ”

The sea and the life around it are inevitably a source of energy and inspiration for many of Nadya’s creations. The sea is presented mostly like landscape in her paintings. In many of her paintings, the action takes place on the beach, along the sea, the river, the pool – in general, water has a strong presence. Many of the author’s paintings were created on the basis of preliminary sketches on the beach or on the basis of photos from the summer. / “Sisters I” and “Sisters II”, “Veleka”, etc. /

However, if in paintings from 2015-2016 the sea is in the background and figures are coming to the fore, then in  pictures from 2017-2108 in  series “Underwater” the figure is already inside – under water. In that way, figure in Nadya’s paintings  hanges her position. If in the previous paintings figure was nearby the sea, now she was diving inside. Here the image brings another sensation – it accepts dangerous of water.

The entire Underwater series was created after the author’s trip to Malta and her exploration of the Mediterranean sea. Captivated by underwater beauty there, she creates a series of paintings on the subject. Textile creations created in parallel with the canvas during this period are also inspired by the sea – corals, rock formations and more.

The sea is also an inspiration in her short films – the first of which was created for her participation in  Student Video Art Festival, which takes place annually at  Shumen University ‘’ Ep.K. Preslavski’’ where she completes her Master’s degree. Thus, at the invitation of her professor, she is inspired and creates her first short film “To find each other”, which was filmed in  Smokinya area at the end of September, when the beach is already deserted. The film is directed and scripted by the author.

Sea canvas continuing it’s life in her designers clothes. This year Nadya creates collection with integrated in it printed paintings from Underwater series. Thus, they are living a new life and she hopes to reach a wider audience. 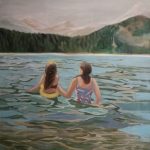 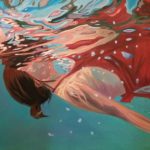 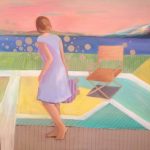 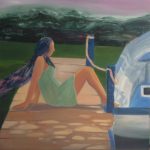 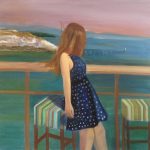 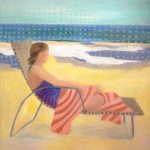 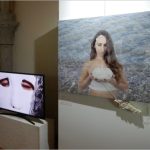 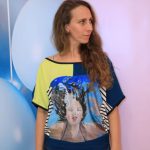